Let the Light Shine On 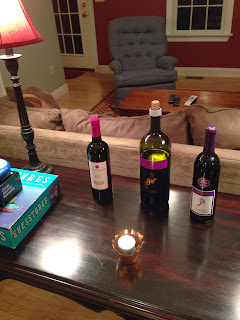 Got some potentially bad news today about a new opportunity that I was exploring. It's one of things that I was already starting to feel apprehensive about, but now that I have gotten some pretty logical information about the state of things, it seems more likely than before. I don't want to jinx myself by totally writing off the opportunity altogether, but it's kind of hard to ignore the writing on the wall.

See, this is where my pessimistic side really wants to come out and say "see, this is why you should never get your hopes up about anything. Nothing ever works out." And I'm not gonna lie, in this moment, my mind is giving voice to those negative feelings. Sadly, my mind very easily slips back into this self-defeated default mode. It sucks.

However, I am trying to let that tiny little flicker of positivity deep inside of me not get entirely swallowed up by the black hole that is my pessimism. The little guy is giving everything he has to try and shoot his rays of light right through my spirit and into the rest of my mind and body. He knows that he is outnumbered, and he knows that the darkness is a lot bigger and stronger, but he's just not willing to give up.

So, to honor the courageous fight that he's putting up, I am not going to give up on him. Fight on, little buddy. For both of us.


Based on my current mood, I think that I am going to hold off on the next part of the story about this past weekend in the country. I don't want the story to get all muddled by how I am feeling right now.

*photo above: The "entertainment table" from this past weekend, ie wine and party games, and one of the many candles that she brought. It was definitely something that I would think to bring on a weekend getaway, but I think that the little flickers of light (and the scents) around the house defiitely added to the overall ambiance. And hey, not gonna lie, I could go for some red wine by candlelight right about now.

This is a well-liked inside bet, which is 원 엑스 벳 again quite self-explanatory. You either bet on a purple or black quantity, which is the final even money, one-to-one bet you can make make|you might make}. As the above answer states, altering the fitness perform so that zero is not a possibility is an efficient solution.