Trying Not to Look 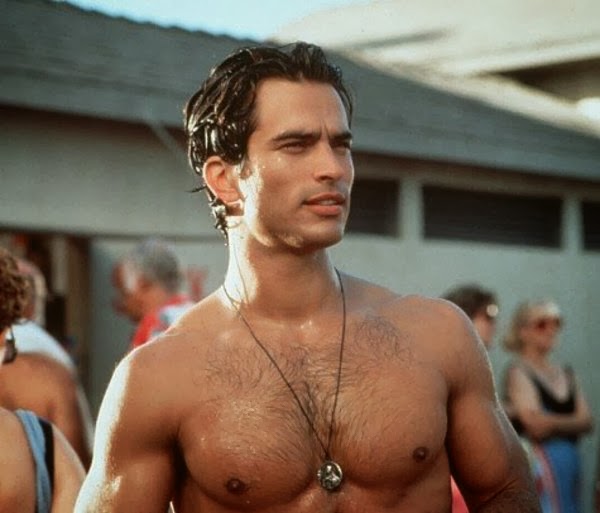 Trying to get this in before midnight, so bear with me.

So, as you know I was really on a mission with my New Year's Intentions to not focus on men. I was going to fully focus on myself, with a "no boys allowed" sign tacked to my brain much like the one in The Little Rascals movie. When I am thinking about men, I always feel that it is too much of a distraction, and I totally abandon the me that I am working on. However, I am finding that I am just as distracted trying to not think about men as I am when I just allow it to happen as it will.

Much like when you tell a child to not touch something, all they can seem to think about is touching that thing, when I tell myself to not think about, say, Jonathan Schaech coming out of the pool in the movie How to Make an American Quilt, that's ALL I can think about.

I feel like my mind has been so consumed these past few days with thoughts of romance. It might be because I had a little slip...sexually....yeah....

It was a little post-holiday party, and I had a moment with one of my casual hookups. And I'm not gonna lie, it felt great, but by the end of it, I felt so guilty for even getting myself into it, I just kept apologizing. Yeah, not the sexiest exit to a dalliance.

Part of it was that I didn't have the willpower to resist, but the other part was that it wasn't even with a prospective relationship. I do consider him a friend, but we have already discussed that we would not be good dating material for eachother. So it was just a setback in terms of my trying to focus on myself and self-love. but I will say that it does feel nice to be wanted, even as shallow of a feeling as that may be.

Well, at the end of the day, I am going to just let it be what it is, and move on. I will not let these feelings of guilt and "failure" find a place in my head right now. I said that I was going to work on going easier on myself, and forgiving myself, and this is the prime opportunity. I am going to continue to try to focus my energies on myself and falling in love with myself. But if I happen to catch myself checking out a hot guy, then I am gonna let myself enjoy that look.


preview from the upcoming HBO series Looking,  about a group of gay guys looking for love, like everyone else in the world. (damnit, 12:00, oh well.)

(photo above: Jonathan Schaech, in the infamous scene.... good lord....)

Update: 12:07am- If anyone else is as taken by that image as I am, here's the link to the clip of him in that scene from the movie. (I got a shiver just watching it.....damnit, focus Adam!)
Posted by A-squared

Slot machines are usually a casino’s largest source of revenue. While the sport has actually collected $1 from the participant, administration is aware of} that finally ninety cents of that will be distributed to other players. Dancing Drums™ showcases the favorite pick ‘em Fu Fly characteristic, the famous Fu Babies Jackpot, and Free Games Bonus that has an exciting re-trigger characteristic. Enjoy mesmerizing imagery inspired by Asian thematic components. The Malta Gaming Authority, more generally recognized as|often known as} 1xbet korea the MGA, is a well-renowned iGaming regulator. The group safeguards players' rights and goals maintain up} excessive standards within the industry.