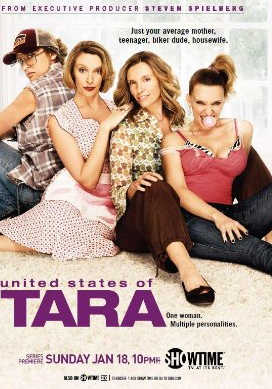 Ok, I dunno if anyone out here has heard of this show (though you probably have), but this show is AMAZING. Produced by Steven Spielberg, aired on Showtime cable network, you can't expect anything less than excellence.

First of all, you have Toni Collete, better known for her role as Muriel in that classic film Muriel's Wedding (more recently in Little Miss Sunshine), playing a wife and mother of two kids. On the surface sounds like a basic show: a nice suburban family of four living in Kansas. However, the plot twist is that her character, Tara, has split personality disorder (UPDATE: this is wrong, apparently the correct name is Dissociative Identity Disorder, or D.I.D. for short). One minute she is herself, the next she turns into T: the 15-year-old girl who smokes weed, plays Dance Dance Revolution and buys birth control for Tara's daughter, Alice: the 1950s style housewife who cooks for bake sales and does household chores in a string of pearls, or Buck: the male redneck gun enthusiast who thinks that he lost his penis in the Vietnam war and sexually harasses women. When the show starts, you are to believe that these are the three alternate personalities that take over Tara's body whenever they get the chance, but are these three it? Why does she have these personalities? Will she ever be able to get rid of them? All this is explored further throughout the season.

Although Tara has had this disorder for apparently quite some time, it is still amazing to watch how each family member deals with her different alters in their own way. Her husband, played by John Corbett (previously Aiden on Sex and the City), is constantly trying to maintain a level of balance within the family, consistently not allowing Tara's "alters" to dominate family functions. Who's to say that Alice cannot go to a parent/teacher conference? Or that Buck can't go to a school recital? He also spends some time trying to keep the two female alters from trying to sleep with him, which we are to understand is not cool with Tara.

Her daughter, played by Brie Larson, is probably one of the funniest to see interact with the alters. She seems like best friends with T, is constantly annoyed by Alice, and wants Buck to stop hitting on her friends. In essence, she seems like the normal 15-year-old girl, just trying to not be too embarrassed by her parents.

Her son, played by Keir Gilchrist , is probably one of the most fascinating family members to me, though it might be because he's gay. At 14-years-old, he dresses in vintage sweater vests and cardigans, drinks chai in bed, and would prefer to read Valley of the Dolls at the shooting range than actually shoot a gun. The writers were also courageous enough to give him something of a romantic storyline, developing a crush on a classmate played by Andrew Lawrence (that's right, younger brother of actors Joey and Matt Lawrence......that boy grew UP).

Tara also has a sister, Charmaine, who does not seem very sympathetic to her sister's plight, and would rather her just "stop pretending and act normal", so I'm assuming that she hasn't picked up a psychology book in about 50 years........... Though you soon find out that Charmaine has problems of her own, as funny as they may be.

Apparently the show has already been picked up by Showtime for a 2nd season, and I couldn't be happier. If you have Showtime, or can find the episodes online, I would definitely recommend watching this show. I promise that you won't be disappointed. It's well written, well acted, and flat out hilarious. My only complaint: it's 30min long, where I think that it could definitely be 1hr per episode. But it seems that all Showtime comedies run 30 mins, ie Weeds and Californication.