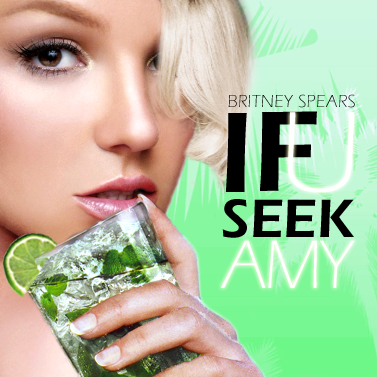 Ok, so for anyone that knows me, I was not always a big Britney Spears fan. I constantly mocked her, would occasionally bop to one or two of her singles off of each album, but never was I a Britney Spears fanatic. However, I don't know what it was about her last album Blackout, but I loved it. I can listen to the whole thing all the way through without even rolling an eye or skipping a track. So when the new album Circus came out, I then fell in love with Womanizer, Circus, and some other tracks, including the tongue-in-cheek "If You Seek Amy". Now I will admit that I was one of the slowheads that did not instantaneously get the joke (for all those slower than me, If You Seek Amy translates to F.U.C.K. Me, get it? Now I am sorry to bother you, please go back to your Highlights magazines and Backyardigans coloring books) but once I did, I thought that it was hilarious that she would make this song, and waited to see how long it took for the radio stations to catch on and censor the song in some way shape or form. Now apparently the radio edit is "If You SEE Amy", so now there's no problem......right? I mean who wants to get F.U.C.A.'ed? not me. I love how the video plays on the tongue-in-cheek idea, while still making the video make sense regardless. Like how although at one point Britney is dressed like a suburban homemaker, she is surrounded by scantly clad dancers gyrating in her general direction. Well, hope you enjoy it as much as I did. This previously bald-headed bitch is doing things, and I am proud of her. Take a peek: