A Much Needed Sense of Humor 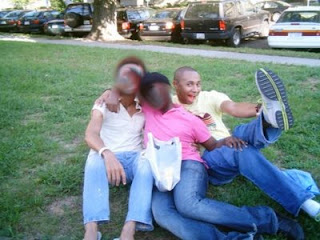 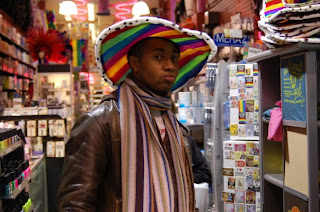 Do you ever find yourself taking yourself too seriously?

I have a nice little studio apartment, and I find myself not decorating it because I don't want it to look silly. Now anyone that knows me, knows that I can get pretty silly at times. I have video footage of me acting a FOOL back in high school, and some pretty incriminating pictures of myself in college being all kinds of foolish in college (fyi, when drunk, i can do a mean drag impersonation of a crazy Caribbean bag lady, although not on purpose....), but for some reason, towards the end of my college career and my entrance into the working world, somewhere along the line I got the idea that seriousness (i don't know if that's a word but it sounds good) translated into maturity. So while I have bought a few random items for my apartment, like a shitload of free strings of xmas lights and a framed collage of Audrey Hepburn photos that i bought from a street vendor in NYC, I have not posted any of them in my apartment for fear that it will look tacky and childish. Why do I do that? Whose approval am I searching for?

Well, to a degree, there is someone whose approval that I am searching for.....sort of. Now before I say this, feel no need to slap the shit out of me, I have already mentally done it. So save your manicures, my face isn't worth it.

This guy I met last summer seemed to be everything that I wanted to be, and was someone that I could see myself being with. He was intelligent, driven, and had a strong idea of who he was, a skill that I am always just shy of mastering. He was living out here in DC by himself, taking care of himself, working full time, interning on Capitol Hill, and actually has aspirations of becoming president one day, with a tangible plan of action that's been put into place. However, beyond his modest-yet-tasteful studio apartment in the Foggy Bottom area of DC, just blocks from Georgetown, the one thing that occurred to me was this: he takes himself waaay too seriously. I mean, that is not to say that he doesn't laugh at anything or go out to a club, but when he does laugh he never brings himself to tears or snorts or almost makes a drink come out of his nose, and when he goes to a club, I can almost guarantee that he doesn't cut any kind of rug. So despite my admiration for his focus and drive, I do not admire how guarded he keeps himself and how he never lets his metaphoric hair down (i say metaphoric because i have never seen his hair longer than mine, which I never allow to grow longer than about 3/4 of an inch). As much as I would like to be seen by the world as an adult, I don't want to be seen as a stick in the mud. So put that hand back down and get out of the pimp-slapping stance.

I remember when I was in college, and I was kind of feeling like my room lacked a certain sense of, oh i dunno, whimsy. So, I got out some calendars that I bought for cheap at a book store (why i felt the urge to buy them in the first place i can't recall), one was Winnie the Pooh, and one was The Wizard of Oz (Judy Garland not L. Frank Baum), and I just ripped them up and put random shots of Winnie the Pooh an Lumpy the Heffalump in my room along with images of Dorothy and the Tin Man. When people walked in, they would be like "umm....yeah, how old are you?" followed by "umm....yeah, how gay are you?" but I didn't care. Whenever I walked in my room, I always had something to smile at whenever I was having a shitty day.

Now if you'll excuse me, I had Thai for lunch, and all the curry goodness is making me sleepy. But when I get home, I think that I will be adding a little whimsy to my apartment.

Email ThisBlogThis!Share to TwitterShare to FacebookShare to Pinterest
Labels: A Cold Night in March, As I Am, Boys, Changes, College, Making Progress, My Youth, My Youth Photos, Photos, Running with Scissors, Trip down memory lane, Trip to NYC, Work, Youtube

haha, yeah, that was in NYC at a Ricky's Beauty Supply

LMAO, at me and Lance's blurred faces