Inquiry: Just How Much Does Our Internet Connection Really Connect Us? 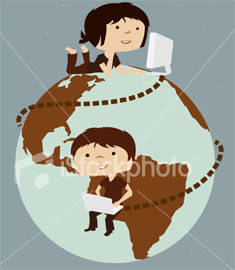 Have you ever been in a situation where you are on the street, and you see someone who you know, but you are not sure if they know you as well? Now I am not talking about a celebrity, but rather, a ce[web]rity: say, the author of a blog that you have read on the regular basis, or a friend of a friend on Facebook whose photos you occasionally browse. Not really someone you know, but you kind of forget that you don't know them personally, since you read or view something about their personal lives everyday. What do you do in situations like that? Do you think that it is appropriate to walk up to them and say hi, or should you just stare at them from a far like Jane Goodall with the apes, jumping into a bush if they happened to notice you? Most of the blogs that I read on the regular basis are written by people living in other places, like Los Angeles, Rhode Island, or New York City. However, recently when I discovered TheNewGay.net, a collaborative blog based out of Washington, DC, I really started to feel like I knew these people, in the sense that we had been to the same places (restaurants, clubs, neighborhoods) and had some of the same experiences. I let the fantasy take hold of me, and I think to a degree I really started to think that I had recently made a new group of friends. That was, until this past Wednesday. I was walking through Adam's Morgan (a small somewhat trendy neighborhood in Northwest DC), and I looked up and realized that I was looking at Zack, one of the co-founders of TNG. Now, since he is one of my favorite columnists on the site, I have read quite a few of the articles that he writes on the site, so when I saw him, my initial reaction was to shout out “Hey Zack! How've you been? What are you doing right now?” but right before I walked right up to him and gave him a hug, I remembered: he has no idea who I am. At that point I had been looking at him for quite a while as we were approaching each other on the street, so I tried to quickly think of what I could say to him or how I could approach him without coming off as a stalker or a loser. But before I could think of what make me sound less crazy, we had passed each other, and headed back off into our respective lives. Was I crazy for even thinking about approaching him, or was I even more crazy for thinking that I couldn't? When you post a blog online, you are allowing thousands, sometime millions of people to peer into different aspects of your personal life, and personal opinions. Is it crazy to think that they will start to feel like they know you personally? I dunno, maybe I am just over thinking it, but I feel like when I read these people's blogs, it brings us one step closer to being in each other's lives. I wonder if there's anyone out there who reads my blogs and has thought about what they would say when if they saw me? Probably not, but I guess the egotistical side of me would like to think so.

I know what it has been like when I meet someone who I have befriended on Facebook without really knowing them. Once when I was a sophomore in college (when I first became a member of the Facebook cult), I was walking into my dormitory and a girl stopped me in the doorway by putting her hand on my chest. “You're Adam, I know you from Facebook,” she said with a smile . And all I could think to say in response was “Oh, ok. Hi, how are you?”. I mean I didn't exactly run into her arms and proceed to sit down and talk with her over coffee, but I definitely don't think that I made her feel awkward or strange for doing so (regardless of how I may have felt on the inside), and I think that that was the respectable way to respond to a situation like that. By befriending her online, wasn't I passively giving her an invitation into my life? She had seen my age, where I lived, who else I knew, and multiple photos essentially chronicling my life up to that point. Was it so wrong of her to think that she wouldn't be able to say hi to me if she saw me on the street? Is it so wrong of me to think that I can say hello to a blogger whose writings I admire? And if not, where do you draw the line? I mean, I would not invite myself out with them and their friends, but am I allowed to ask them how they are doing? Between social networking sites like Facebook and MySpace, and online journals and Columns like LiveJournal and TNG, which one (if either) are really a legitimate window into someone else's life? And if not, what exactly is the point of these things? With the new age of technology making most of human kind connected by some small yet very powerful wires and frequencies, it doesn't seem like they are necessarily making anyone feel that much closer to anyone else. Maybe it is in fact these wires and waves that are keeping us at an arm's distance away form each other. I know plenty of people who would opt to make friends through a computer screen over going out and meeting someone any day. What does that say about us as a generation? We think that we are getting closer to each other because we are all so much more accessible, but we are in fact ensuring that there will always at least be a computer screen between ourselves and the awkwardness of venturing out and meeting someone new. Amongst all these questions that I asked myself, I still have no idea what is deemed appropriate anymore. I dunno; maybe Zack would know what to do............
Posted by A-squared

Email ThisBlogThis!Share to TwitterShare to FacebookShare to Pinterest
Labels: Blogs, Inquiries, My Life