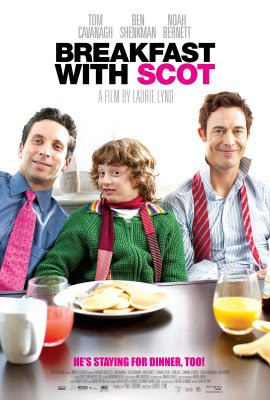 I know that I am usually late on all news, but I really have to recommend this film to anyone who has not seen it yet. I watched it online the other night, and I instantly fell in LOVE with it. The film Breakfast with Scot centers around a somewhat closeted gay couple (played by Thomas Cavanagh of the hit NBC series Ed and Ben Shenkman of the award winning mini-series Angels in America) who are suddenly given the responsibility of taking care of a young boy, Scot, who is pretty much every stereotype of a gay child brought to life. The film is a really moving tale of two men who have to come to terms with their own fabulousness, as well as a young flamboyant boy who is trying to find his way in the world. I think that it is a sweet family film.

Now I have seen almost every gay film that is out there (probably close to 75%, and making my way through the other 25%) and I have to say that this is one of the best ones that I have seen. The script is written well, the lead actors are great, and the young Scot (played by Noah Bernett) did such a great job, I think that every gay person watching this film can either identify or sympathize with his journey from the beginning of the film. I loved this film from beginning to end, and I hope that anyone watching it enjoys it too. It is making it's way through various GLBT film festivals, and I plan to buy this film on DVD, if you really can't wait to see it, you can watch it in full by way of ALLUC.ORG, by clicking the link here. Watch the trailer below. ENJOY!