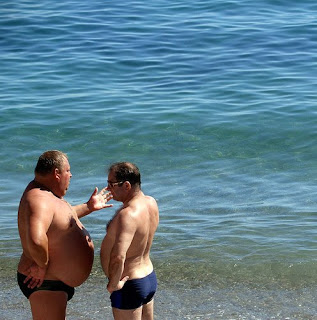 Ok, so here's a scenario:

You are walking down the street, and you see someone walking towards you wearing something very nice. Maybe a coat, some shoes, a nice hat, you get the idea. You have never seen this item before, but you really like it. So, as you all both stop at a street corner waiting for the light to change, you turn to them and ask, "Excuse me, but I was just wondering where you got that [insert item here]?" The person then turns to you and says "Umm....... I don't think that they make them anymore." and proceeds to quickly walk across the street and away from YOU.

The same beginning, and then the person says "Oh I don't tell where I got my clothes from. If you want to know where to find it you can go online and look for yourself."
WHAT THE HELL????

Is it just me, or are people for some reason protective of their clothing items? The first situation personally happened to me, and the second happened to someone that i knew. I think in both instances, we just stood there for a moment and had to process what had just happened. I mean, am I crazy for thinking that that's crazy?

People act as if they cannot share with you where they got their clothes because
A.) They do not want you to have the item in question
B.) They are embarrassed of where they got it
C.) They are just assholes who think that nothing in their life (even where they shop) is any of your business. They write you off as nosy and go about their business.

Although I guess it's not my place to tell someone that where they shop is not a big issue to keep secret (unless someone is stalking you, but then you need to get a restraining order), I just do not understand why people are so protective about it. People seem to find something that they like, and although they bought it in a retail store where they sell hundreds, even thousands of the same thing every week, they actually think that they will never see someone else wearing that same item of clothing. The only way to make sure that your clothes are not walking down the street on someone else is to make them yourself, and even then you better hope that said person walking down the street doesn't have a gift for garment sewing. It seems that people get so defensive over things that seem so trivial to me.

Personally, I always tell people where I get my clothes from. I may even just say where I got it if someone compliments me on it. I am not throwing it in their faces, I am making sure that if they want to own it then they can go out and get their own (because I don't really lend out items of clothing on a regular basis......). I also know that everyone is just trying to look nice, and if I know where someone can get it, especially if it is at a good price ("times is hard these days on everybody"), then I want you to know so that you don't get overpriced, and I would expect the same courtesy. I realize that two people can look completely different in the same garment, so why be so worried about someone else wearing your look? Just be confident that whoever it is will not wear it as good as you. But they are certainly allowed to try.

boo, Its because A: The are insecure about who they really are, or B: Due to their insecurity, attempt to make something mysterious about themselves in order to divert attention away from thier lame ass life, or C: they know that you will look better in it...lol