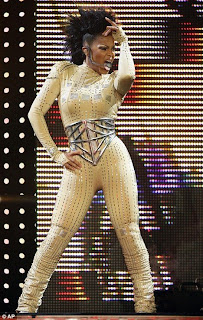 Ok, so, Tuesday was a very stressful day for me.

I had bought tickets to the Janet Jackson concert back in June, and all summer that seemed to be the light at the end of the tunnel for the season. I mean, I would be working all summer (essentially not having a vacation), and seeing Janet Jackson live in concert would make everything worth while. Then, a few weeks ago, the news started coming in: Janet was canceling concerts left and right! She had become ill and no one knew exactly what was going on. Was it the flu? Was something broken? Was she pregnant? I really hopes that she wasn't pregnant, because I really don't wanna see what her and Jermaine Dupri's baby would look like.....but that's besides the point. Slowly but surely, my spirits began to drop, and my hopes were beginning to fall. I was just waiting for the news that the show had been canceled. I knew that it was coming, so I just wanted to hear it. Just go ahead and say it. COULD SOMEONE PLEASE JUST QUIT PLAYING WITH MY EMOTIONS AND TELL ME THAT THE SHOW IS CANCELED /POSTPONED?! But then, all of a sudden, it appeared that she may be gettin better. She had come down with these severe migraines, but was planning on picking the concert back up in, you guessed it, little ol' Washington DC! (read the rest of the entry by clicking show full post at the bottom)


But I still wasn't convinced. So, basically all Wednesday was basically me silently waiting on pins and needles to see if there would be news that this concert would also be canceled. The end of the workday came, and I began to make the trek over to the Verizon center, along with Steven and Gary (Gary was really nice and got us all binoculars in case we wouldn't be able to see, it was a very sweet little thing to do), and we soon fell in line with the other fabulous people who were heading to see one of our music idols tear up the stage. I felt like Diana Ross in the Wiz (or Judy Garland in the Wizard of Oz, whichever reference you can more easily relate to), easing on down the yellow brick road. As we went in and found our seats, I soon realized that we were in one of the few sections that seemed to have alot of older, straight people, and I thought, how the hell am I going to be a fabulous dancing queen fool with all of these judgy wudgy people all around? But I told myself to just chill, and just realize that I should be happy that I was about to see Janet and pay no mind to the possible haters in my section.

Soon, the music started, and Janet came out with bang, and I was suddenly happier than I even thought that I would be. The music was so good, and the dancing was just so nice, and some of the dancer's bodies were soooo tone , I was in my seat dancing and singing along. At first I was really self conscious about standing up and dancing, because hardly anyone in my section were getting up to dance, and Steven and Gary (whack ass heffers....yeah I am talking to you all!) refused to stand up and dance with me (Steven spent the ENTIRE concert looking at it through his binoculars, and Gary spent most of the concert trying to mess with him), and I didn't want to block the people's view behind us. But soon enough, I looked up, and these middle aged white men and women were dancing with their beers in hand, and I was like, c'mon now. I owe it to myself, and Miss Janet, to get up and shake my ass along with her. At first I thought that I could just wait until intermission, get a cocktail (aka liquid courage) and use that to get my body moving and shaking, but about an hour and a half in, I realized that there probably would not be an intermission. So it was a do or die moment. I had already missed dancing to a lot of my favorite songs, and if I didn't dance, I would never forgive myself. So, by around the time she broke out doing Rhythm Nation, I was up out my chair, thinking to myself, I paid a shitload of money for these tickets, Janet pulled herself out of her ill feelings for me, and I owed it to both of us to dance like no one is looking! So I did............ and I have never been more happy about it. By the time the concert was over, I was on such a high that it lasted all the way back to Steven and Gary's house, where we drink a couple of Smirnoffs, and collapsed for the night. All in all, it was one of the best experiences of my life. Go on Miss Janet!


These are clips from the other tour locations before she cancelled, but it was the same show, so you'll get the feel of it.