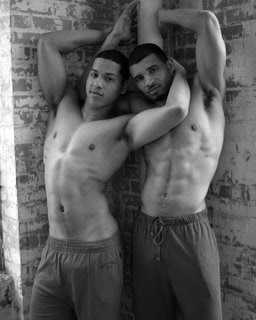 Ok, so last night's entry was a little strange, but today's will be the same. I know that I have not really been writing alot of serious entries, but I am in uncharted territory. Seeing as how my last serious relationship was about 4 years ago, I do not know what the dating protocol is. I do not know what the dating milestones are, so I am not sure as to when you are allowed to start calling someone your boyfriend, when you are allowed to start calling them whenever you think of them, and when you are allowed to start trying to integrate this new person into your life. I started seeing someone and I am not quite sure where I stand. I have never been one to enjoy the cat and mouse games that certain people enjoy. I guess that I am a freak like that. I have the romantically crippling flaw of seeing everyone that I meet and become somewhat intimate with (on some sort of sexual level) as a potential lifetime mate. I mean, I usually don't get in this mode unless the other person is being at least a little responsive to it. However, taking a look at my dating history, it seems that I don't know what I am doing. So, here I am, having never been on a formal date with said boy, I'll call him "Green", yet we have spent two sessions together, the first not being so good, but the second one was REALLY good. I mean, I heard my name being called out on more than one occasion, and I tasted the sweet "taste" of victory, pun intended. I thought that we were enjoying ourselves, we are kissing in bed, and then, I tell him that I really like him. Not seeing the harm in that myself, he then says to me "Don't fall for me." I was taken aback. I mean, to me, that is like someone telling you while you are fucking to not ever come back to their house. I felt really shocked, confused, and a little hurt by it. I mean, I didn't think that we were ready to move in with each other, but i definitely did not see such a substantial roadblock like this coming. I felt like I was running in a relay race, and right when I passed Green the baton, he sits down and says that he is not running the race. What do I do? Now this boy does not let me say hardly anything without a full explanation, or at least without him questioning the meaning, but when I asked him what he meant by that, he said "nothing, don't worry about it", and when i finally got an answer out of him, he said that he "just thinks that we should take it one day at a time". Therefore, I am in a very awkward situation. I feel like I am being kept at a distance so that I don't get to find out where I stand until he intends for me to. I mean, I keep talking to my roommates, and they tell me that this is all "part of the game", you know, that he "wants me to make sure that I want him, but that he can't have me too easily". What the fuck?!

I mean, is it just me, or is that kind of confusing? I mean, I could see myself really liking this guy, but am I supposed to believe that he feels the same, or am I just being toyed with? How much am I supposed to be going through this early in the "courtship"? I guess that I could just stop being so neurotic and let things flow, but I am already getting in the mode of phone and communications tag. Like, "ok, I have called him to talk before, but he never calls me, what's up with that? Therefore, I should stop calling him to see if he starts calling me." Not only do I think that I sound a little crazy, but I feel a little pathetic. When I asked him what he was doing, since he was not working, he told me that he had nothing planned, so he was just going to be spontaneous. When I said that if he wanted some company that I would be available, he replied "wow, you must be really bored! Haha" Now, maybe I read that as more of a negative statement than it really was, but I gotta say, I am not sure whether it's just in my head or if I am so blinded by the prospect of a relationship that I cannot see that someone is making me look like a fool. The little bit of machismo that I have is making my pride tell me, "A-squared, you need to watch yourself. Don't let nobody turn you into a fool. You have been through too much to allow someone to take all of that power away." And I want to listen, but the sad thing about matter of the heart, is that usually, all bets are off. Hold onto your happiness guys, it's gonna be a bumpy ride.
Posted by A-squared

Email ThisBlogThis!Share to TwitterShare to FacebookShare to Pinterest
Labels: Adventures in Romance, Boys, My Life